From pulling carbon dioxide out of the air to turning water into fuel, innovators are developing new technologies and pairing existing ones to help slow global warming.

To most people, a solar farm or a geothermal plant is an important source of clean energy. Scientists and engineers see that plus far more potential.

With scientists worldwide sounding the alarm about the increasing dangers and costs of climate change, let’s explore some cutting-edge ideas that could transform how today’s technologies reduce the effects of global warming, from five recent articles in The Conversation.

California is developing the United States’ first solar canals, with solar panels built atop some of the state’s water distribution canals. These canals run for thousands of miles through arid environments, where the dry air boosts evaporation in a state frequently troubled by water shortages.

“In a 2021 study, we showed that covering all 4,000 miles of California’s canals with solar panels would save more than 65 billion gallons of water annually by reducing evaporation. That’s enough to irrigate 50,000 acres of farmland or meet the residential water needs of more than 2 million people,” writes engineering professor Roger Bales of the University of California, Merced. They would also expand renewable energy without taking up farmable land. 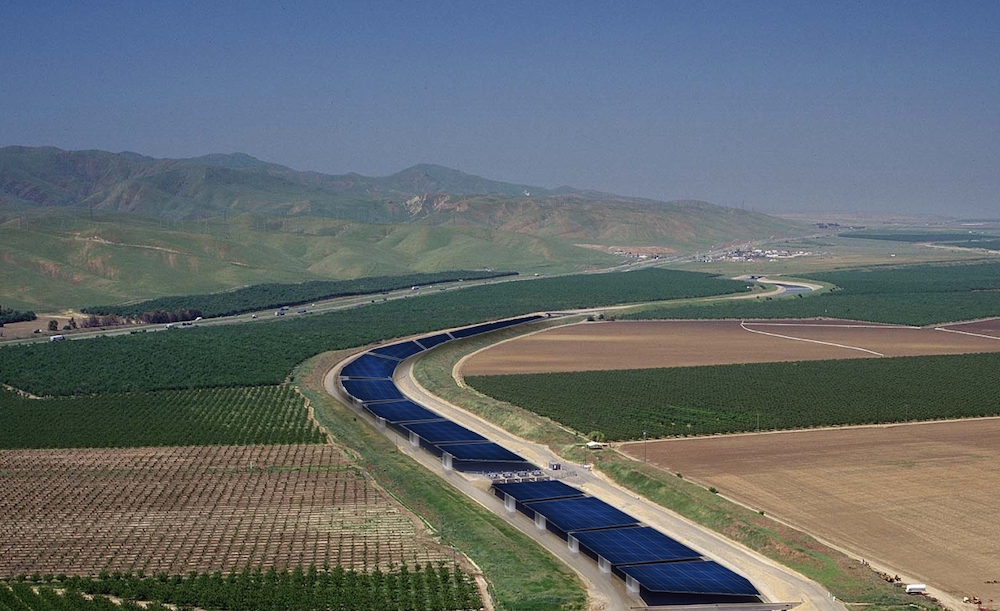 Other countries including China and India are also testing the solar farms over water. Solar Aquagrid LLC, CC BY-ND

Putting solar panels over shaded water can also improve their power output. The cooler water lowers the temperature of the panels by about 10 degrees Fahrenheit (5.5 Celsius), boosting their efficiency, Bales writes.

For renewable energy to slash global greenhouse gas emissions, buildings and vehicles have to be able to use it. Batteries are essential, but the industry has a supply chain problem.

Most batteries used in electric vehicles and utility-scale energy storage are lithium-ion batteries, and most lithium used in the U.S. comes from Argentina, Chile, China and Russia. China is the leader in lithium processing.

Geologist and engineers are working on an innovative method that could boost the U.S. lithium supply at home by extracting lithium from geothermal brines in California’s Salton Sea region.

Brines are the liquid leftover in a geothermal plant after heat and steam are used to produce power. That liquid contains lithium and other metals such as manganese, zinc and boron. Normally, it is pumped back underground, but the metals can also be filtered out.

“If test projects now underway prove that battery-grade lithium can be extracted from these brines cost effectively, 11 existing geothermal plants along the Salton Sea alone could have the potential to produce enough lithium metal to provide about 10 times the current U.S. demand,” write geologist Michael McKibben of the University of California, Riverside, and energy policy scholar Bryant Jones of Boise State University.

President Joe Biden invoked the Defense Production Act on March 31, 2022, to provide incentives for U.S. companies to mine and process more critical minerals for batteries.

3. Green hydrogen and other storage ideas

Scientists are working on other ways to boost batteries’ mineral supply chain, too, including recycling lithium and cobalt from old batteries. They’re also developing designs with other materials, explained Kerry Rippy, a researcher with the National Renewable Energy Lab.

Concentrated solar power, for example, stores energy from the sun by heating molten salt and using it to produce steam to drive electric generators, similar to how a coal power plant would generate electricity. It’s expensive, though, and the salts currently used aren’t stable at higher temperature, Rippy writes. The Department of Energy is funding a similar project that is experimenting with heated sand.

Renewable fuels, such as green hydrogen and ammonia, provide a different type of storage. Since they store energy as liquid, they can be transported and used for shipping or rocket fuel.

Hydrogen gets a lot of attention, but not all hydrogen is green. Most hydrogen used today is actually produced with natural gas – a fossil fuel. Green hydrogen, in contrast, could be produced using renewable energy to power electrolysis, which splits water molecules into hydrogen and oxygen, but again, it’s expensive.

“The key challenge is optimizing the process to make it efficient and economical,” Rippy writes. “The potential payoff is enormous: inexhaustible, completely renewable energy.”

4. Using your EV to power your home

Batteries could also soon turn your electric vehicle into a giant, mobile battery capable of powering your home.

Only a few vehicles are currently designed for vehicle-to-home charging, or V2H, but that’s changing, writes energy economist Seth Blumsack of Penn State University. Ford, for example, says its new F-150 Lightning pickup truck will be able to power an average house for three days on a single charge.

Blumsack explores the technical challenges as V2H grows and its potential to change how people manage energy use and how utilities store power.

For example, he writes, “some homeowners might hope to use their vehicle for what utility planners call ‘peak shaving’ – drawing household power from their EV during the day instead of relying on the grid, thus reducing their electricity purchases during peak demand hours.”

5. Capturing carbon from air and locking it away

Another emerging technology is more controversial.

Humans have put so much carbon dioxide into the atmosphere over the past two centuries that just stopping fossil fuel use won’t be enough to quickly stabilize the climate. Most scenarios, including in recent Intergovernmental Panel on Climate Change reports, show the world will have to remove carbon dioxide from the atmosphere, as well.

Engineers and geophysicists like David Goldberg of Columbia University are exploring ways to cut those costs by combining direct air capture technology with renewable energy production and carbon storage, like offshore wind turbines built above undersea rock formations where captured carbon could be locked away. 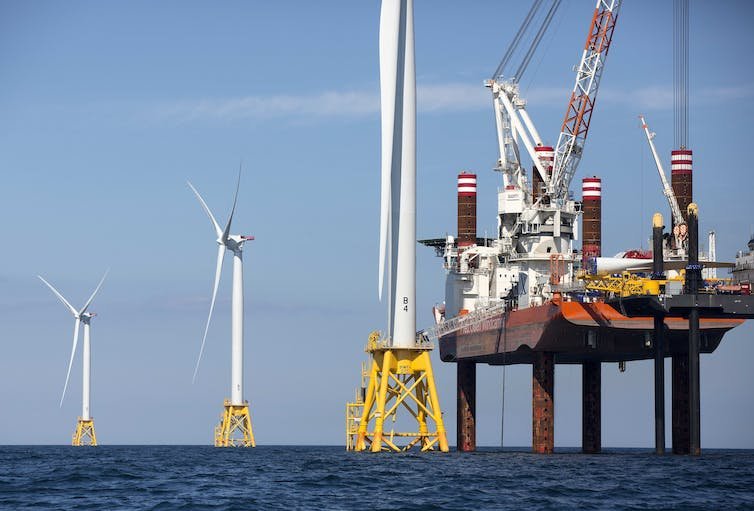 The U.S. had seven operating offshore wind turbines with 42 megawatts of capacity in 2021. The Biden administration’s goal is 30,000 megawatts by 2030. AP Photo/Michael Dwyer

The world’s largest direct air capture plant, launched in 2021 in Iceland, uses geothermal energy to power its equipment. The captured carbon dioxide is mixed with water and pumped into volcanic basalt formations underground. Chemical reactions with the basalt turn it into a hard carbonate.

“Built together, these technologies could reduce the energy costs of carbon capture and minimize the need for onshore pipelines, reducing impacts on the environment,” Goldberg writes.