During Covid-19, people once again began to latch onto the benefits of moringa, a tree that’s a highly nutritious food, medicine and magical talisman all rolled into one.

“Look at how fine those leaves are,” said Dika Nanta, pointing up to the waving branches of a spindly tree. “They’re so wispy that at first glance it’s hard to imagine why Balinese people sometimes call this tree ‘the broomstick of the gods’.”

The moringa tree (Moringa oleifera) we were looking at really was quite unremarkable – less statuesque than the rambutan tree nearby and far less imposing than the mango trees on the other side of the road. Yet moringa (daun kelor in Bahasa Indonesia) was once believed to have such intense magical properties that a simple sprig of this “broomstick of the gods” would be used to brush the evil spirits away from the resting place of a deceased person.

Nanta, who graduated from Udayana University with a bachelor’s degree in landscape architecture, grew up in a village near Ubud (considered Bali’s spiritual heartland) and recalls eating moringa regularly as a child, most often boiled in a spicy stew. More recently, in his official capacity as “Botanical Guru” at the new Raffles Bali, he has become fascinated by both the science and traditional beliefs behind what he refers to as “Bali’s tree of life”.

“Moringa was traditionally a common part of the Balinese diet,” he said. “It began to fall into disuse long before modern science latched onto the spectacular nutritional benefits of what is now known in the West as a superfood.”

According to a 2013 study on traditional uses of Moringa oleifera published in International Journal of Phytotherapy Research, the plant’s dried leaves contain seven times the Vitamin C of oranges, nine times more protein than yoghurt, 10 times more Vitamin A than carrots and 15 times the potassium of bananas. It’s thought to have 17 times more calcium than milk and 25 times more iron than spinach. 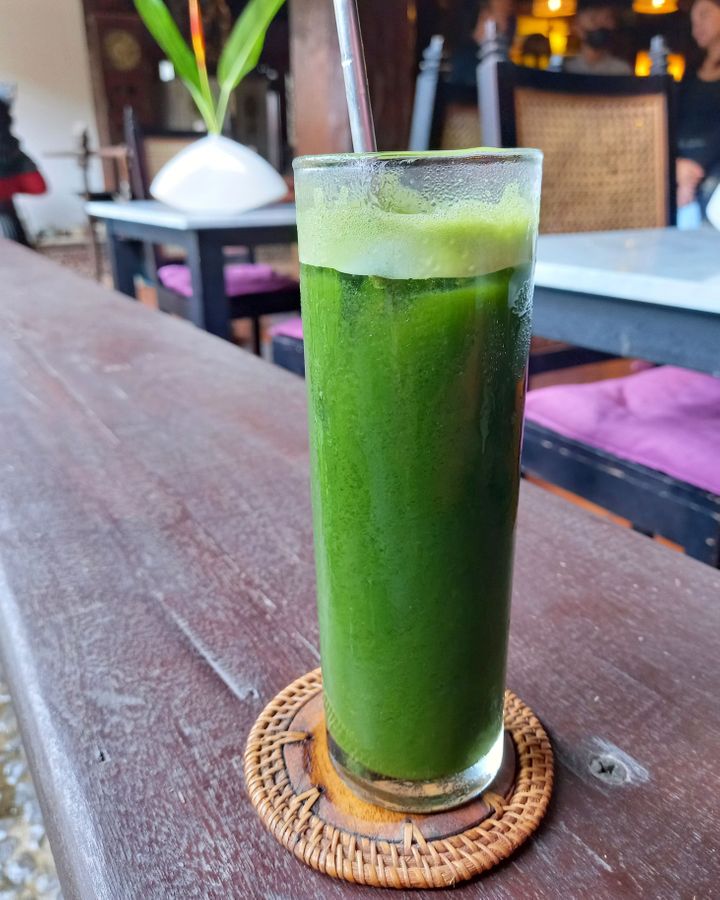 Traditionally, most Balinese family compounds were protected with a moringa tree. It was a highly nutritious food, medicine and a magical talisman all rolled into one. Over the course of recent decades, it came to be considered as merely peasant food – and as part of old mystical superstitions. However, during the Covid-19 pandemic, as the workforce of Bali’s crashed tourism industry returned to live off the land, people once again began to latch onto the benefits of the marvellous tree that grows like a weed.

Having heard about moringa’s nutritional benefits, my wife and I started eating it on a daily basis during the pandemic. It grows freely in the west Balinese village where we lived, and we quickly realised that it was incredibly versatile as a cooking ingredient.

Eaten alone, moringa leaves are reminiscent of peppery spinach but Balinese cooks typically add a variety of freshly pounded local herbs and spices to the simmering vegetables to serve as a leafy stew. We dropped raw leaves into smoothies; cooked them in omelettes, soups, stews and curries; and chopped them to create delicious, peppery seasoning for egg mayonnaise sandwiches and salads.

I planted two 6ft cuttings and within a year and a half they were taller than our two-storey house. Much of our fence line became a living, edible fence of moringa.

Despite the fact that the plant is freely available almost anywhere on the island, you’d rarely, if ever, see it as an ingredient in warungs (local eateries), let alone on a tourist menu. However, a few chefs, perhaps tempted by a nutritious and flavourful ingredient that is freely available, are reviving the tradition.

Moringa features on the ever-changing menu at the increasingly famous tourist spot Rasta Café Medewi in the west coast surf-town of Medewi. “I try to cook whatever local produce is in season and moringa is almost indispensable in that it’s available year-round,” said Nafisha Dewi, the café’s chef, as she prepared soup made with moringa leaves, pumpkin, aromatic ginger (known sometimes as sand ginger), garlic, shallots, candlenut, chilli, coriander, lemongrass and coconut milk. 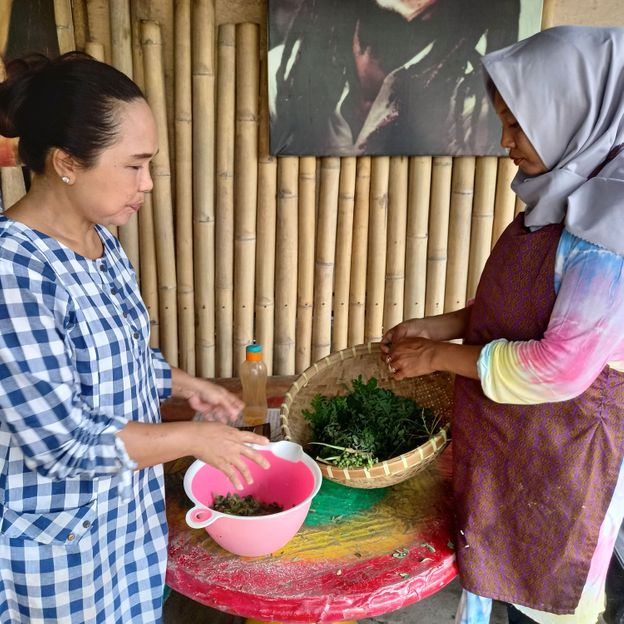 While Bali is predominantly Hindu, this western side of the island also has a large Muslim population. Dewi was Hindu until she married her husband Rasta and entered the Muslim faith, but both recall moringa being a favourite family dish during their childhoods.

“We used it not only as food but also often as medicine,” Dewi explained as I tucked into a second helping of her delicious soup. “My mother would treat our bruises with ground moringa leaves mixed with salt.”

“That’s right, we still also mash the leaves to put on cuts,” Rasta interrupted. As a hired driver, he often visits other Indonesian islands. “The only people I know who don’t eat moringa are the West Javanese,” he recalled. “They believe so strongly in the magical cleansing power of moringa that they use it to wash dead bodies before burial. They think it’s very strange that we Balinese eat it!”

Both Dewi and Rasta also agreed that witches and sorcerers – aspects of Balinese belief that, even today, remain very real – can never eat moringa: “Anyone who’s involved in black magic must avoid the tree at all costs,” Dewi said. “It’s so pure that just a handful of these tiny leaves can cancel the effect of black magic.”

While native to northern India, 13 species of moringa are found throughout the world, from Bangladesh to Burkina Faso to Brazil, where they are used as traditional cures for everything from conjunctivitis to gonorrhoea to malaria. The tree is known in English as “drumstick tree” (due to the shape of the seed pods) or “horseradish tree” (as its roots taste similar to horseradish), but the fact that it’s also commonly referred to as “mother’s best friend” and the “never die tree” would seem to imply that its benefits were not entirely unknown to the British.

If there is one disadvantage to moringa, it’s the high nitrogen content in the leaves. Although this makes them excellent fertiliser, fresh leaves begin to break down within minutes of being picked, which means that distribution is really only viable in dehydrated form. While gardeners in northern climes have lately been experimenting with growing this hardy plant, it is most often available only as relatively expensive powder. 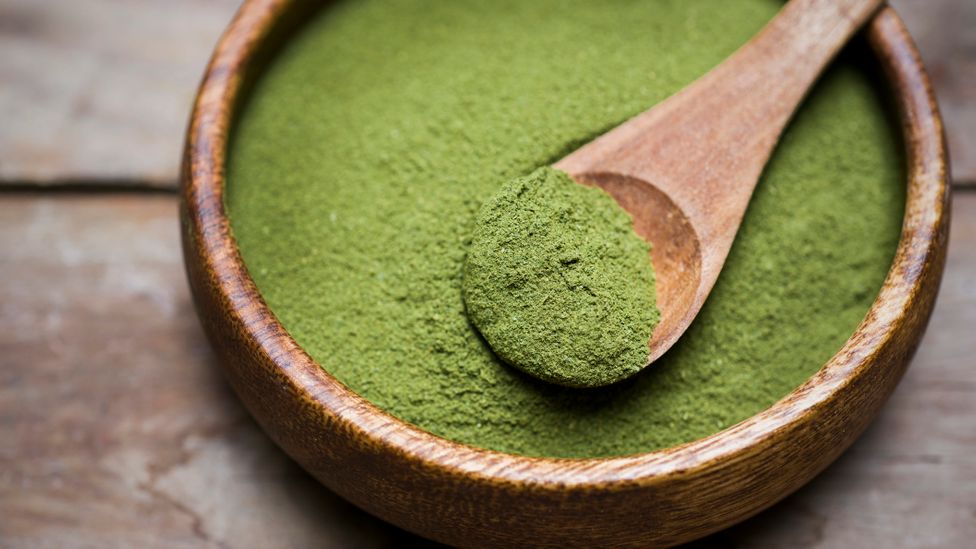 “We’re very lucky to have easy access to fresh moringa on Bali,” said Australian-born chef Dom Hammond. As research and development chef at the island’s iconic Potato Head complex, she has experimented widely with the use of local ingredients in plant-based fine dining. “One amazing thing about moringa though is that apparently it doesn’t lose any nutrients in the drying process, so moringa powder is equally nutritious. It seems that this plant could be a solution to food shortages and nutrition all over the world.”

Known for its innovative approach to protecting the environment, Potato Head serves “zero-waste” cocktails (enhanced with offcuts and trimmings from fruit used in the kitchen) with moringa salt; while the menu at the complex’s Kaum restaurant boasts a Central Javanese soup with moringa leaves, snake gourd and fresh coconut cooked in turmeric broth.

“There’s so much you can do with the leaves, but I’ve been experimenting with other parts of the plant too,” Hammond said. “Once the flowers are dried you can even fry them as a delicious alternative to mushrooms.”

In fact, the Balinese use every part of the tree. While the leaves are most commonly boiled for soup or jamu (a medicinal pick-me-up drink), the sword-like seed pods can be stir-fried or used in a stew. It’s said that the root is poisonous but that a small section brewed as tea is a remedy for intestinal worms.

And perhaps because Balinese farmers noticed that the tree seemed to be almost impregnable to parasites and insects, the bark is often chopped and mixed with uncooked rice, aromatic ginger and water to create a traditional skin-enhancing body scrub.

“When I was a kid, my grandma used to cut the moringa bark into bite-size pieces,” Nanta told me, “then she’d chew it into a paste and rub it over our skin.”

Balinese chef I Made Tantra Wijaya recalls the same remedy. However, these days, with infinitely more finesse, he incorporates moringa into the raw-food menu at Fivelements Retreat. Wijaya’s colleague Chef Ni Putu Yuliastuty now harvests moringa in the retreat’s kitchen-garden every day and has become an expert at using it in smoothies, vegetable-based green juices, soups and salads.

“Even though we grew up with this plant as part of our diet, I never realised it was so versatile,” she said.

“It’s peppery so it adds good flavour to anything,” Wijaya added, as the pair worked together in the kitchen. “Sometimes with natural medicines we say, ‘more bitter more better’. In the old days, Balinese women would wean their babies off the breast by smearing juice from moringa leaves around their nipples. Times have changed though. These days they’re more likely to use toothpaste.”

It seems that there are potentially endless uses for moringa and, while the Balinese are steadily reviving a few of the most time-proven, it’s amazing to realise that the rest of the world is yet to open its eyes to the full potential of the “tree of life”.

BBC Travel’s Forgotten Foods offers hope for the world’s “lost” foods through chefs and purveyors who are bringing them back to life though cooking and cultivation.